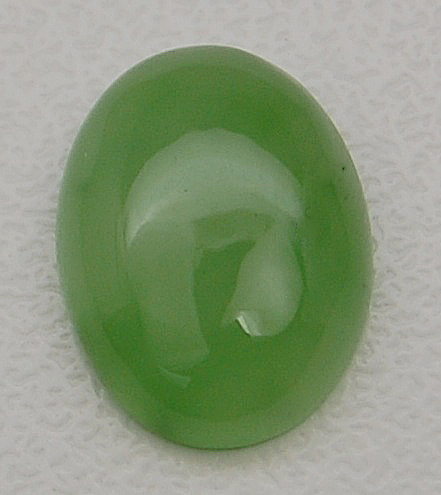 Introduction:  Nephrite is one of the minerals commonly called jade, the others are jadeite and omphacite.   Mineralogically, nephrite is a fibrous variety of the actinolite-tremolite series.  The cabochon above is from Lake Baikal in Russia and weighs 4.95 ct.

Stone Sizes:  Alluvial boulders of several tons are not uncommon in certain localities.  Large, fine pieces are usually carved.  It is also commonly cut as cabochons or beads.  The Smithsonian displays a large boulder alongside a thin slab, backlit to show the color.

-Poland (near Jordansmuhl):  creamy white to gray-green with green patches

Treatments:
-Usually none (N) but on rare occasions, it has been dyed to alter color

-Cause of Color:  generally iron

-Absorption Spectra:  rarely shows a diagnostic pattern; sometimes a vague line at 500 nm as well as lines in the red in green stones of exceptional quality.

-Cleavage:  not visible due to aggregate structure

Name:  Nephrite is from the Greek word, nephros, meaning kidney due to the shape of the rounded, organ like shape of nephrite boulders and pebbles.

Dates:  Nephrite is the gem for the 12th anniversary.

Care:  Nephrite can be safely cleaned in the ultrasonic, steam cleaner as well as warm, soapy water.