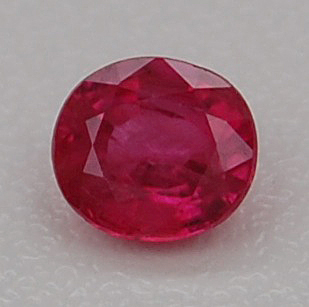 Introduction:  Ruby is a variety of the species corundum.

Colors:  orange-red to purplish-red or brownish-red.  The dominant color must be red to be considered ruby.  Lighter stones may be more correctly called pink sapphire.

Clarity:  Ruby is a Type II clarity gemstone.  By definition, gems of this type grow extremely clean in nature and usually have no eye visible inclusions.  Silk, fine rutile needles, oriented at 60 degrees are commonly seen in natural ruby and are the inclusions responsible for star rubies.  Included zircon crystals and related stress fractures or halos are sometimes seen.  Fingerprint inclusions, hexagonal growth lines and color zoning are also seen on occasion.

Stone Sizes:  There are several large rubies and star rubies (often named) in museums and private collections.  Examples are the 167 ct Edwardes Ruby in the Crown Jewels of England and the 138.7 ct Reeves Star Ruby at the Smithsonian.  In todays market, rubies rarely exceed 5 carats.  Star rubies can occur larger, perhaps up to 20 carats.

Localities:
-Burma (Myanmar):  probably the best known historic source of fine ruby.  Deposits in Mogok and Mong Hsu have provided rubies for the trade for many years.  Currently, there is an import ban of Burmese ruby into the United States.

-Thailand:  Thai rubies are scarce in the current market but have been important historically.

-Tanzania, Mozambique, Madagascar:  relative newcomers as sources for ruby but fine stones have been found in recent years

-Afghanistan, Pakistan:  Ruby of fine color but usually small in size from Jagdalek, Afghanistan; semitransparent to translucent ruby (mostly for cabochons) from the Hunza Valley in Pakistan.

Sri Lanka:  Most Sri Lankan rubies would be correctly coined as pink sapphires as the base color can be a dark pink, rarely a true red.

-India:  Mysore has been the source of star ruby, a small percentage would be considered exceptional quality.

-Greenland:  Small amounts of fine color, small ruby has been found which to date has not produced sizes larger than melee.

-United States:  North Carolina has several localities that have produced ruby but usually not in gem quality.

Treatments:
-Heating (H) is done to improve color and clarity.  Removing purple or brown overtones can often result in stones with a stronger red color.  Heating can also dissolve the rutile silk to improve clarity.  These treatments are commonly done and generally detectable by observing other mineral inclusions within the stone.  Controlled heating can recrystallize the silk to improve asterism.

-Filling (F) with glass requires special mention as there has been confusion within the trade as well as among the general public.  Often, during the process of heating, borax is used as a flux material.  The flux healing of fissures occurs during the heating process.  The industry has accepted trace amounts of flux in heated stones.  Rubies containing significant evidence of flux healing are generally discounted to a higher degree.  In recent times, the clarity enhancement of ruby utilizing a lead glass filling has become prevalent.  This “fracture-filling” has turned low grade ruby into stones with higher transparency and improved color.  It is important to recognize the difference between “flux filled” and “fracture filled”.  The price of lead glass fracture filled rubies are extremely inexpensive.  This process has been taken to such a high degree that in some stones, there is more glass than ruby and/or the ruby is being held together by the glass.  These stones are more correctly termed ruby/glass composites.

-Beryllium diffusion (U) can improve color.  It is not routinely done and can be difficult to detect without advanced laboratory equipment.

-Oiling (O) is done to hide cracks and improve color.  It is not routinely done and easy to detect.

-Cause of Color:  Chromium

-Fluorescence:  Burmese stones fluoresce a strong red in LW and moderate red in SW due to low levels of iron; other localities have a weaker fluorescence in LW

-Cleavage:  None but twinned crystals may show a parting direction.

Name:  Ruby is from the Latin, ruber, meaning red..

Dates:  Ruby is the birthstone for July and the gem for the 15th and 40th wedding anniversaries.

Care:  Ruby may be safely cleaned by the ultrasonic and steamer except on stones that were oiled.  Lead glass filled rubies should never be exposed to strong cleaning agents.  In some cases, lime juice can cause discoloration of the glass filling.  Warm, soapy water is always safe.