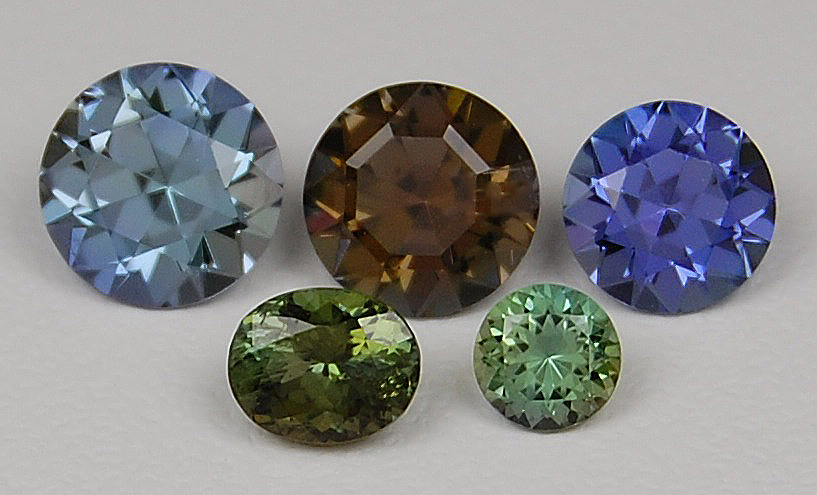 Introduction:  Zoisite is a mineral species of the epidote group.  It’s best known variety is tanzanite, discovered in 1968 and given it’s trade name by Henry Platt, the vice president of Tiffany & Co., in honor of the source country. Pictured above from left to right in the back row, 2.42 ct light blue tanzanite, 2.19 ct brown zoisite, 1.63 ct tanzanite.  The front row is 1.01 ct oval chrome zoisite and a 0.48 ct round chrome zoisite.

Clarity:  Transparent zoisite is of Type I clarity.  By definition, gems of this type grow extremely clean in nature and usually have no eye visible inclusions.  Fingerprint inclusions are occasionally seen.

Stone Sizes:  Large clean tanzanites have been cut in excess of 200 carats but most sizes seen in the jewelry industry are less than 20 carats.  Chrome zoisite is mostly less than 5 carats.  Translucent to opaque thulite and ruby in zoisite have been available in large pieces.

Localities:
-Tanzania is the only source of tanzanite, chrome zoisite and ruby in zoisite.

-Pakistan, Greenland, Norway are additional sources for thulite and some of the color varieties of zoisite.

Treatments:
-Heating (H) is routinely done on all tanzanite.  Although some tanzanite is found with a purple/blue color, it often has a brown overtone.  Heating eliminates the brown secondary color on these pieces as well as converting the initial brown zoisite to the purple/blue color of tanzanite.  The treatment is undetectable  and the color is stable.

-Cleavage:  perfect in one direction

Dates:  Tanzanite is a recent addition to the birthstone list as an alternate for the month of December.

Care:  Tanzanites are somewhat delicate and should never be immersed in an ultrasonic or steam cleaner.  Warm, soapy water is always safe.