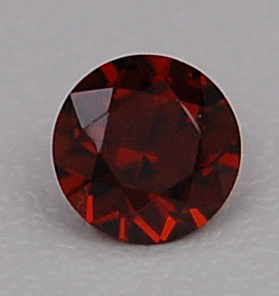 Introduction: Almandine, also spelled as almandite, is a species in the garnet family.

Clarity: Almandine garnets are of clarity Type II. Gems in this type typically grow with some minor inclusions in nature that may be eye visible but usually are well hidden or require magnification. Needle-like crystals, zircon crystals with strain halos and irregular, rounded crystals of low relief are commonly seen under magnification.

Stone Sizes: Almandine has been cut into large sizes (over 20 ct) but larger stones tend to be too dark. Most almandines within the trade are less than 10 ct.

Name: Almandine is a corruption of the locality name Alabanda, in Asia Minor, from which place that red garnets were described by Pliny.