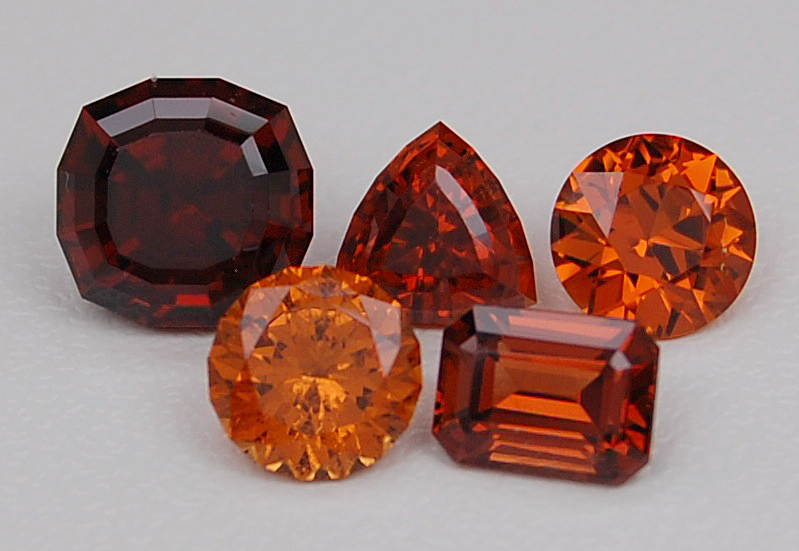 Introduction:  Spessartite (also spelled spessartine) is a species in the garnet family.

Clarity: Spessartite garnets are of clarity Type II. Gems in this type typically grow with some minor inclusions in nature that may be eye visible but usually are well hidden or require magnification. Wavy, irregular, feather-like inclusions, two phase inclusions and negativecrystals are common.

Stone Sizes: Spessartites from some localities yield stones up to 25 ct while others such as Namibia and California are seldom over 10 ct. The Smithsonian has an orange-red spessartite that weighs 109 ct.

Localities:
-Nigeria: stones can be on the larger side (up to 25 ct) but often with dark tones (front right)
-Namibia: source of intense rich orange stones also known in the trade as “Mandarin” garnet (back right)
-Afghanistan: Fine reddish- orange color but in limited sizes, typically less than 5 ct (back center)
-Brazil: large gemmy crystals often dark reddish-orange (back left)
-California: from the Little 3 Mine in Ramona. Spessartites from this locality are of fine orange color but the mine has been closed. (front left)
-Virginia: from the Rutherford #2 Mine in Amelia Court House. Occasional, large gemmy crystals yielded stones up to 40 ct. This locality is also no longer producing.
-Madagascar, Sri Lanka, Burma

Name: Spessartite is named after the locality Spessart in the Bavarian region of Germany